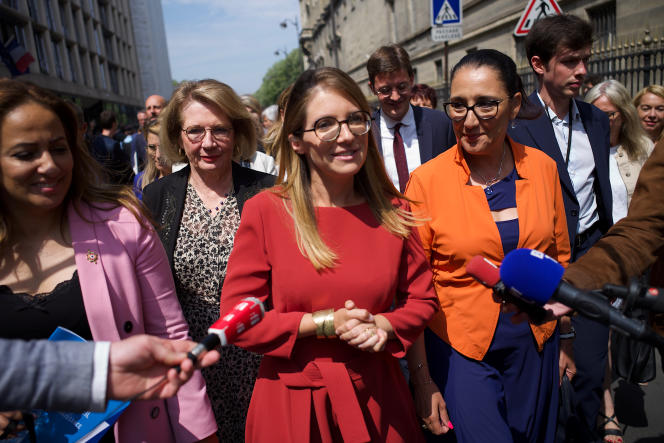 Before the election of the President of the National Assembly, expected during the first public session of the 16th term, Tuesday, June 28, the nine parliamentary groups that emerged from the second round of the legislative elections proceed, one after the other, to the election of their president. On Wednesday June 22, the elected representatives of La République en Marche (LRM), the Republicans (LR), Horizons as well as the Communists and related parties and the MoDem appointed their representative, after those of La France insoumise on Tuesday – Mathilde Panot was re-elected.

The 171 deputies who are members of La République en Marche – whose name should become “Renaissance” in the coming weeks – have chosen the deputy of Yvelines, Aurore Bergé, to hold this position with important prerogatives. The group president takes part in the conference of presidents, during which the agenda for discussions is discussed, may request a suspension of the public session, has under certain conditions more speaking time and the possibility of extending evening debates beyond the authorized hours to complete the examination of a text.

Former member of the Republicans, Aurore Bergé, 35, won by 88 votes against 29 to Guillaume Vuilletet, 25 to Rémy Rebeyrotte and 11 to Stella Dupont. Former deputy president of the group, Ms. Bergé succeeds Christophe Castaner, who was not re-elected as a deputy on Sunday. In front of the press, Ms. Bergé said her “great emotion”, her “great pride” and her feeling of “great responsibility”, as the Macronists lost the absolute majority and the executive seeks the way to pass its reforms. .

Olivier Marleix takes the lead of the Les Républicains group

The deputy of Eure-et-Loir Olivier Marleix, 51, for his part was elected Wednesday at the head of the deputies Les Républicains by 40 votes against 20 for the other candidate, Julien Dive, and a blank vote. Son of former minister Alain Marleix, Olivier Marleix has been a deputy since 2012. President of the Republicans of Eure-et-Loir since 2016, this representative of the conservative wing of LR had sponsored Laurent Wauquiez in 2017 in the race for the head of the party, then Michel Barnier during the primary of 2021.

He had already been a candidate for the presidency of the group in 2019 and had been beaten by Damien Abad. The latter was expelled from the party after being appointed Minister of Solidarity in the government of Elisabeth Borne. The LR group went from a hundred to sixty members in the new Assembly, following the failure of Valérie Pécresse in the presidential election.

The third election, Wednesday, took place on the side of Horizons. The party founded and chaired by Edouard Philippe, made up of 29 deputies, decided to want to be represented by the mayor of Ajaccio Laurent Marcangeli, deputy of Corse-du-Sud since Sunday. Strongman of the opposition to the nationalists on the island, lawyer, he is a friend of the former Prime Minister.

Mr. Marcangeli, a 41-year-old lawyer, was the youngest MP in Corsica, at 31 in 2012, elected under the colors of the UMP in the 1st constituency of Corse-du-Sud. He had put the right back in power in 2014 as mayor of Ajaccio. Due to the rule of non-cumulation of mandates, in force since 2017, he will have to give up his duties as mayor. As early as February 2022, Mr. Marcangeli had supported Emmanuel Macron for a second term.

The deputy of Puy-de-Dôme, André Chassaigne, was reappointed to the head of the group of elected communists and relatives (6 overseas deputies joined the 12 deputies of the French Communist Party), named Democratic and Republican Left ( GDR). “As we committed to following the presidential election, the deputies of the GDR group will work together with the other parliamentary groups of the New People’s Ecological and Social Union”, noted in a press release the national secretary of the French Communist Party. , Fabien Roussel, welcoming the election of André Chassaigne, which he supported.

On the MoDem side, Jean-Paul Mattei, 68, close to François Bayrou and based in his former constituency of Pyrénées-Atlantiques, was elected on Wednesday. He succeeds Patrick Mignola, who was not re-elected MP. Mr. Mattei won by 36 votes against 9 for his only competitor, Nicolas Turquois, and 2 blank votes. The centrist group, an ally of LRM and Horizons in the majority, has 48 members, a third of whom are newly elected.

Thursday, it was the turn of Marine Le Pen to be elected president of the National Rally group, for which she was the only candidate, by the simple acclamation of the 89 RN deputies. The group has also nominated Sébastien Chenu as candidate for the presidency of the Assembly, and confirmed Jean-Philippe Tanguy, deputy for the Somme, as candidate for the finance committee.

The deputy of Landes, Boris Vallaud, for his part was elected president of the socialist group, taking over from Valérie Rabault, who was not a candidate. Aged 46 and spokesperson for the Socialist Party, Boris Vallaud won by 26 votes against 4 for his colleague Guillaume Garot. Jérôme Guedj, who defeated Minister Amélie de Montchalin in the legislative elections in Essonne, had withdrawn his candidacy in the morning.

A co-presidency for the Greens

At the head of this group of around thirty deputies, Mr. Vallaud succeeds the elected representative of Tarn-et-Garonne, Valérie Rabault, who has shown herself on several occasions to be unenthusiastic with regard to the alliance of left New People’s Ecological and Social Union (Nupes) sealed with Jean-Luc Mélenchon (La France insoumise) in the legislative elections. The Nupes “gave hope”, while being in “the affirmation of everyone what we are”, affirmed to the press Mr. Vallaud immediately after his election.

On the environmental side, the head of Europe Ecologie-Les Verts (EELV), Julien Bayou, and the deputy for Isère, Cyrielle Chatelain, were appointed Thursday to the “co-presidency” of the group in the National Assembly, while that Sandrine Rousseau will be a candidate for the vice-presidency of the Palais-Bourbon. This co-presidency, a tradition of environmentalists, will be “de facto”, because it is not provided for in the statutes of the National Assembly, which EELV hopes to see modified. Concretely, the co-presidents will hold the press conferences and coordinate the group of 23 deputies.