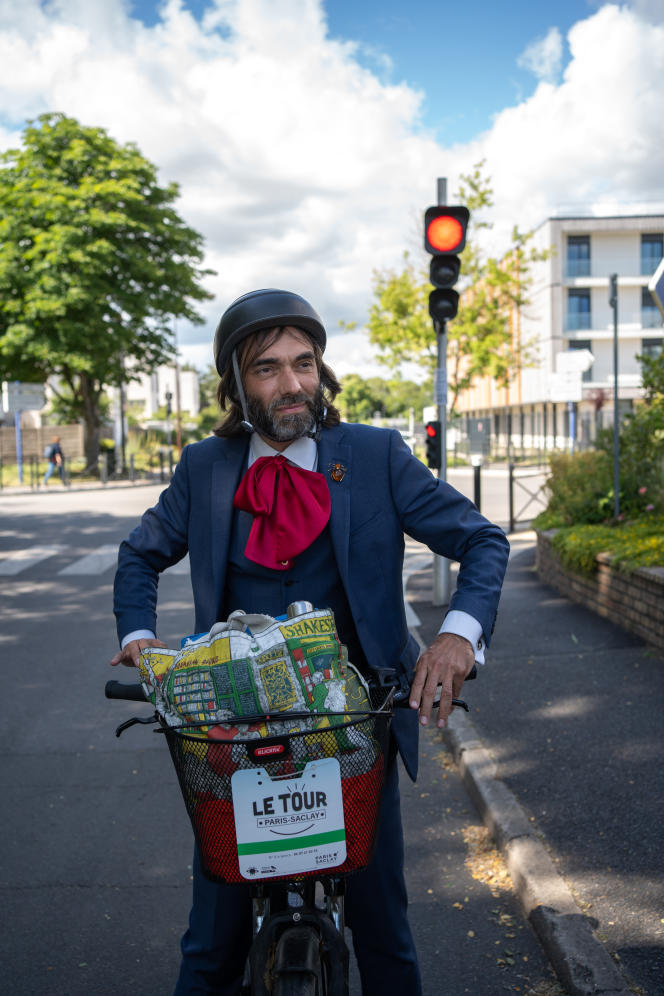 As he passes, the children ask, “Why is he dressed like that, sir?” ” Blue three-piece suit, red neckerchief, a spider-shaped brooch hanging from the lapel of the jacket: Cédric Villani cannot go unnoticed in the alleys of Courdimanche, a popular district of Ulis (Essonne), where he advances, holding his bicycle in one hand, a packet of leaflets in the other. Three boys sniff out the right customer for their end-of-year raffle. He hands a 5 euro note to one of them. The kid wants to leave. He holds him back. “Hey, now you have to give me back 4 euros, so I’ll have given you 1 euro: 5 minus 4 equals 1.”

Even in the campaign for his re-election, Cédric Villani never hesitates to give a maths lesson. But the political equation of the moment is harder to solve, even for a Fields Medal recipient. Knowing that in the first round of the presidential election, the left-wing candidates gathered 37.3% of the votes, Emmanuel Macron 36.6%, Valérie Pécresse 7.5%, and the far right just over 15% , who will be elected deputy in the 5th district of Essonne?

Between the offbeat image of Villani, his passage from En Marche! to ecology since his first election, the indeterminate extent of the Melenchonist wave as of participation, too many unknowns combine to predict the result. Since 1988, the constituency of Ulis, Gif-sur-Yvette, Bièvres, Orsay and Saclay has alternately sent men from the right and from the left to the Assembly.

The only certainty, this battle looks very much like a return match between Cédric Villani and the Macronists. In 2017, the star mathematician had been one of the figures of the “Macron generation”, these newcomers elected to the Assembly in the wake of the presidential election. Then the young deputy from Essonne broke with the president, to the point, in 2020, of running for mayor of Paris as a dissident and thus contributing to the fiasco of Benjamin Griveaux then Agnès Buzyn, the two successive representatives of La République en Marche (LRM) in the capital. At the time, the campaign of the two official macronists was led by a certain Paul Midy.

Today, the two men find themselves face to face, but in Essonne. Cédric Villani defends his seat there under a new banner, that of the New Popular Ecological and Social Union (Nupes). As for Paul Midy, who became general manager of LRM, he was sent by the presidential party to win back the constituency.

“Are you still an adviser to Mr. Macron?” In Les Ulis, in front of the African restaurant La Pajovic, Cédric Villani must once again explain his atypical career. Only three other LRM deputies in 2017 are running today under the Nupes banner, like him: Delphine Bagarry in the Alpes-de-Haute-Provence, Hubert Julien-Laferrière in the Rhône, Aurélien Taché in the Val-d’Oise. “With Macron, we argued in 2020, and since then, I’ve been with the environmentalists,” he sums up. In his eyes, it is less he who has changed than Macronie who has veered to the right. “The year 2020 was that of Macron’s great renunciation of his ecological commitments”, he regrets.

After joining Delphine Batho’s Generation Ecology movement, the scientist is moving forward today with his opponents of yesterday. Like François Périnet, secretary of the Communist Party section at the University of Orsay. “In 2017, I campaigned for the communist candidate, and against Cédric, says this former physics teacher. I was angry with him for having justified the abolition of the wealth tax [ISF]. But there are so many people who, as they age, move from left to right that we are not going to blame those who go the opposite way. The person concerned is stung: “At the time, Marlène Schiappa had promised an evaluation after one year of the abolition of the ISF. Of course, we never had that record…”

Invested by Nupes, Cédric Villani is now supposed to defend the appointment of Jean-Luc Mélenchon at Matignon. In practice, despite strong pressure, he did not put a photo of the leader of La France insoumise on his leaflets and posters, and did not even mention his name. “Ecology, democracy, solidarity, these are our three watchwords”, he hammers in the streets of Les Ulis, determined to seduce left-wing voters without frightening more centrist inhabitants.

A perfect product of the “start-up nation”

“Mr. Villani?” He’s Jean-Luc Mélenchon’s candidate now, you know. In Bièvres (Essonne), this Friday morning, June 3, Paul Midy stubbornly rings the doorbell of each pavilion in this town popular with wealthy families and executives, in the heart of a wooded valley. Often dogs bark. When someone answers, they introduce themselves with one sentence: “Hello, I am Emmanuel Macron’s candidate for the legislative elections”, without mentioning his opponent. But if the mathematician pops up in the conversation, he doesn’t hesitate. “What is at stake on Sunday is a choice between Mr. Macron and Mr. Mélenchon,” he said to a young retiree who opened her gate ajar. And Mr. Villani supports Mélenchon. “Ah yes, it changes tack every time the wind turns a bit,” the lady opines.

New exchange, rue du Loup-Pendu. ” Where are you from ? asks an owner from the window of her house surrounded by a garden. After considering several constituencies, Paul Midy chose Essonne a few months ago, and took care to have a base there to cut short the accusations of parachuting. “There, I’m in Gif-sur-Yvette,” he says. He embarks on his journey: “I arrived at Saclay twenty years ago, when I entered Polytechnique. Then I created my first box at Orsay. And now, I am CEO of La République en Marche. A perfect product of the “start-up nation” dear to Emmanuel Macron, in a way. He also worked at McKinsey, the group at the heart of a controversy over the influence of consulting firms.

For the first campaign carried out in his own name, the unknown Paul Midy plays the Macron card to the full. He constantly defends the action of the government and agitates the Mélenchon scarecrow. “The challenge here is to give strength to the president,” he repeats to everyone. To achieve this, this former “Young pop”, the youth movement of the UMP, hopes to recover in the second round the voters of the classic right, represented on the spot by Michel Bournat, the mayor of Gif-sur-Yvette . For the time being, however, he is slamming all of his “election skydiving” rivals. Including on Paul Midy, accused of having a single objective: “To serve the interests of his party.” Rallying is clearly not on the agenda.