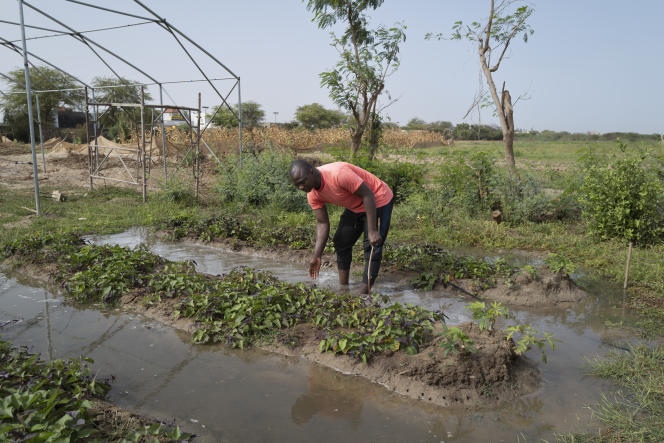 The Great Green Wall is fertile ground for the ecology of health, because it brings together specialists from multiple disciplines facing a single object of study. In the Senegalese Sahel, the reforestation project has been in place since 2008. And, in 2009, the International Men-Milieus Observatory (OHMI) Téssékéré opened its doors, under the leadership of the CNRS-INEE (Ecology and Environment Institute) and from Cheikh Anta Diop University in Dakar. Designed as a long-term observation tool, the OHIM mobilizes researchers in ecology, agronomy, hydrology, zoology, but also in toxicology, microbiology, medicine and anthropology on the same territory.

All of the environmental changes are then analyzed to examine the short, medium and long term dynamics between the environment, health and societies. In concrete terms, the observatory provides many moments of exchange: researchers from different disciplines go on a mission together, share restitution seminars, write joint publications. The multidisciplinary approach changes the view of scientists, highlighting all the complexity of the field. This research structure is essential because it allows the locks that block the deployment of the Great Green Wall to be lifted.

This area is fragile, affected by successive droughts due to climate change. The installation of boreholes associated with the sedentarization of pastoralist populations has intensified desertification by allowing the increase of their livestock. Today, in this landlocked area of ​​Senegal, it rains for a maximum of two months a year (244 mm of water in 2021), the temperature easily reaches 45°C in the dry season, and there is little wildlife. Grass, water and trees have become scarce.

The capacity of the ecosystem to regenerate is studied by ecologists, who analyze the return of certain animal species: the small ones at first (insects, reptiles), and then the larger ones (birds, mammals). These researchers highlight a slow but certain return of biodiversity in the planted plots of the Great Green Wall. Climatologists also show the improvement in temperatures and humidity under cover in the plots. This humidification of the ambient air keeps the dust on the ground, limiting respiratory diseases in the human population.

When ecologists show that desertification has led to an increased use of borehole water, when chemists prove that this water is very heavily loaded with sodium chloride (salt) and when biocultural anthropologists note that the population is strongly affected by arterial hypertension, the link between desertification, borehole water consumption and chronic disease appears very clearly.

Several questions arise from this multidisciplinary observation. Will the multipurpose gardens of the Great Green Wall, which allow people to grow and eat fruits and vegetables and change their diet, have an influence on high blood pressure? Will increasing the number of trees make the ponds more sustainable and thus reduce the use of too salty drinking water?

These examples of pathologies – arterial hypertension and respiratory diseases – show how the environment influences health prevention, making health ecology a new tool for scientists and decision-makers. But restoring the Sahelian ecosystem, or at least regaining a balance in this environment, is a process that takes time: many plots must be replenished, year after year. The young plants resist with difficulty the eight months of dry season which follow their planting.

The information provided by the scientists is essential to the success of the project. This collective and long-term work is essential. Today, researchers from Burkina Faso are involved. Tomorrow, it will be those of Niger and Chad, before the synergy of all the researchers from the Sahelian countries of the Great Green Wall.

News Editor - July 3, 2022 0
It's an unexpected turnaround. Israeli and non-American experts will examine the bullet that killed Palestinian-American journalist Shireen Abu Akleh on May 11 to determine...