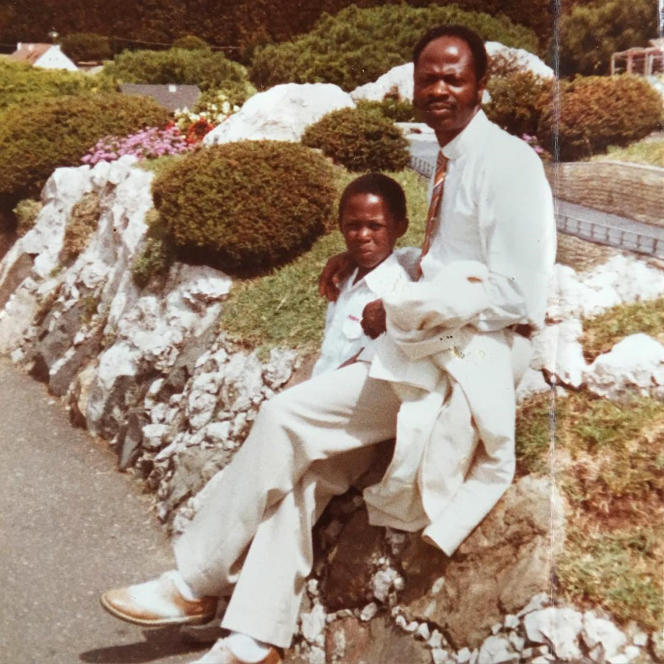 We are in Lugano, Switzerland, at a wedding, with my father, Gilbert. He has always been the cornerstone of my life. My father is an education, a state of mind. What he and my mother passed on to me? Righteousness, righteousness, righteousness. They are simple, honest people, never mean. Righteousness imposes a radicality: not to betray or be complacent, to be attached to the value of words. It costs, in a society or an environment that quickly makes you deviate from your trajectory, but, for him, it is not debatable.

He grew up in Cameroon, began his studies, joined the gendarmerie. In the mid-1970s, he came to France to complete his sociology studies, then started babysitting: Vincennes, Valenton, Maisons-Alfort, where I was born… For my generation, perfectly integrated, it is sometimes difficult to realize what it was like to leave your country behind to come and educate your children, to leave everything behind for an unknown universe.

But, even here, he was able to transmit his country to us, which was everywhere, in objects, conversations, food, like ndolé, the national dish, rather reserved for Sundays. The first time I went there must have been the same year as this photo. My father had worked for a time for Cameroon Airlines, which disappeared, I had cheap plane tickets during school holidays.

I was lucky enough to connect to my story very early on, not to fantasize about it or suffer from being away from it: I was able to meet my grandmothers, see my parents’ village. I remember the long and grueling journey that had to be made to get there, I was crying all the time in the back of the pick-up. The first time, I had an immediate sunstroke: over there, they were like oh! the ! the little French !

At that age, I was a big stone collector. In the village, I picked some near a river. Seeing Indiana Jones, I thought of becoming an archaeologist. Then my irreducible love for football made me dream of becoming a footballer. When I was young, I admired the Ballon d’Or George Weah, from Liberia [whose president he has been since 2018] with whom I could identify, and Chris Waddle, an OM magician whom I adored and who spent his time grimacing on the pitch, being funny – for him, I was breaking my support for PSG.

When I started to go on stage, my parents saw this with a worried look. I was studying education. At home, I had never been funny. I was just trying to exist a little among four brothers, a sister and two half-sisters, I especially stood out when I tried to imitate, as in all homes in the world at that time, the dance of Michael Jackson . But I was on observation, which I think helped fuel my humor.

It was at Moloko, in Pigalle, that my father saw me play for the first time, in 2005. I was moved. At the end, I thanked the audience and said they were in the room, “Dad, I love you. And, as if that was too hard to say, I immediately added, “A lot!” For modesty: we are silent at home! He was happy to see that people were laughing, he was kind to me. And proud, I think. With the same look he had the day I graduated from high school and he shook my hand.