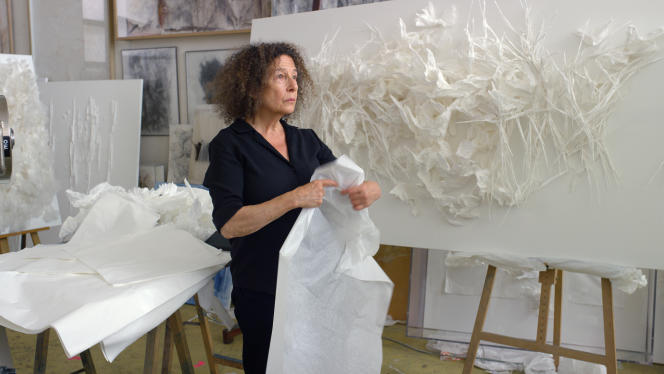 With his medium-length film Présence, presented at the Venice Biennale of Contemporary Art, Wim Wenders attempts to enter the work of French artist Claudine Drai. A process he also undertook with choreographer Pina Bausch in 2011, for the documentary film Pina. Shot with 3D cameras to restore relief, his films are now “installations”, intended more for museums than cinemas.

No, I started with Pina, but she died just before the movie. I met her for the first time here, in Venice, at the La Fenice theatre. But Claudine is the only living artist with whom I made a film. We met in the easiest way in the world: a mutual friend, Jérôme Clément [one of the founders of Arte], who is also one of her collectors, gave her my contact details and she called me! I must say that she has an uncommon force of conviction. I went, as I tell it in the film, first to see the installation she made in the upstairs room of the restaurant Le Grand Véfour, in Paris. Then I came to his studio. When you enter, you are greeted by a photo that shows Giacometti in his. There was also one in Balthus’ studio, about which I once made a little film: I felt welcome! I felt a real affinity with his work which reveals, if you let it reveal itself, a whole spiritual or transcendental world, which touched me. These beings, these angels as she calls them.

We have a different emotion than when we see things flat. And as Claudine’s works develop in space, it seemed necessary to me. When she showed me reproductions in catalogs, I did not find what I had in front of me. They have such a stronger presence! A painter, well most of them, shows a surface. It shows something that is behind. To access it, to integrate into it, to immerse myself in it, I needed the third dimension.

We are not the same, but we share something, otherwise we would not have been able to have this affinity. So it was not a confrontation but rather a synchronicity.

Only one: the brave Vietnamese gentleman on a stretcher in the hospital [the entrance hall of the Saint-Camille hospital, in Bry-sur-Marne] where Claudine has installed a work. We couldn’t, for legal reasons, film with a real patient, so we looked for an extra. We chose this man and then I learned that he has been a professional actor [Hiep Tran Nghia has acted for theater and cinema] for twenty years! I don’t know why he showed up for the casting, but we found him fabulous, present, endearing, without knowing who he was.

I wanted to show that the works were present but that we, the humanity around, we were rather floating. I wanted Claudine’s beings to be there, on the spot, solid, more so than us passing by.

It is a language that the film has found in its works. This particular time that unfolds there is not invented, it is his work that created this time. There is also the filming time, of course, two years because of the pandemic. It’s a documentary and, at the same time, it’s something else: a testimony or a participation in Claudine’s world, which is so rich and complex that I had to have a special camera made to shoot, the close-ups in particular … Cinema has this ability to capture and steal, but also to open up. When I went to the workshop for the first time, it seemed obvious to me that it was necessary to invent another language than the known cinema, documentary or fiction, to open this world to those who do not know it. And we did!

It is necessary for me. Once I know something, I don’t want to do it again, there’s no more invention, nothing more to learn, it’s not worth it. I’ve always tried to make films as if I didn’t know how to make them. The greatest pleasure in a director’s first films is discovery. Unfortunately, for many, it quickly stops to be replaced by routine, manufacturing. I never wanted to manufacture. It may confuse the public, but it gives them a chance to find out. Claudine’s work is unlike anything known: a film had to be made in an unknown way.