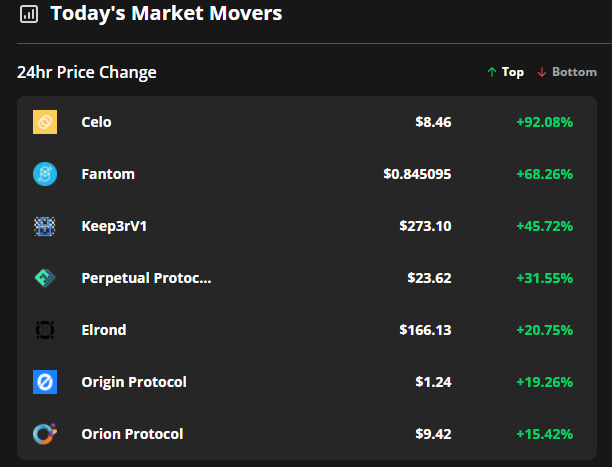 Incentives programs were launched and protocols upgraded were followed by rallies of 50% in CELO, FTM, and KP3R.

The cryptocurrency market once again finds itself waiting for some form of catalyst to get the prices moving, and this week commenced with the market moving sideways as Bitcoin (BTC) struggles to find its footing near $48,000.

Many altcoins have been able to escape the market turmoil and posted impressive gains. This is according to Cointelegraph’s Markets Pro intelligence service. It indicates that altseason is here.

Cointelegraph Markets Pro and TradingView data show that Celo (CELO), Fantom(FTM) and Keep3rV1 [KP3R] were the largest gainers in the last 24-hours.

Celo, a blockchain ecosystem that encourages cryptocurrency adoption by smartphone users to improve global financial inclusion, was the top gainer in the last 24 hours.

VORTECS(tm) data from Cointelegraph Markets Pro began to detect a bullish outlook for CELO on Aug. 29, prior to the recent price increase.

Cointelegraph’s exclusive VORTECS(tm), Score is an algorithmic comparison between historical and current market conditions. It is derived from a combination data points including market sentiment, trading volume and recent price movements, as well as Twitter activity.

The chart shows that the CELO VORTECS(tm Score turned green on Aug. 29, and hit a peak of 75 just 20 hours later, before the price spiked 170% the following day.

The sudden surge in the price of CELO came after the launch of a $100 million “DeFi for the People” initiative by Celo in conjunction with multiple partners, including Aave, SushiSwap, Curve, 0x and PoolTogether. This initiative, which is built on Celo blockchain, aims to exploit the decentralized nature and financial inclusion of the blockchain ecosystem in order to improve financial inclusion for the 6 billion global mobile phone users.

According to data from Cointelegraph Markets Pro, market conditions for FTM have been favorable for some time.

The chart shows that the VORTECS(tm), Score for FTM started to rise on Aug. 28, and reached a peak of 70 on August 29, just four hours before the price rose 80%.

The surge in interest for FTM came following the Aug. 30 announcement of a 370 million FTM incentive program for builders, protocols and teams who bridge assets to the Fantom blockchain and engage with the ecosystem.