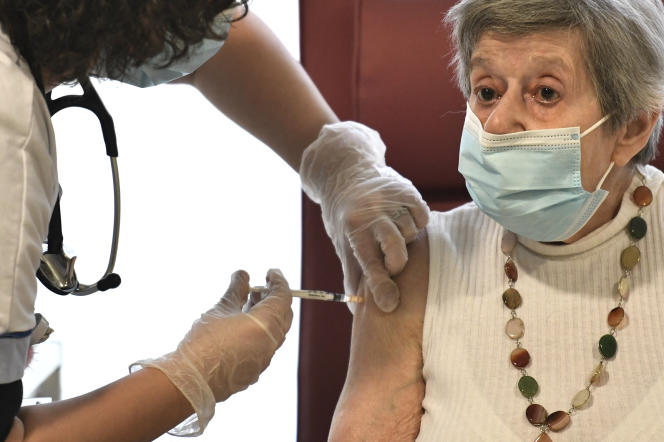 A quarter of eligible people received their second booster vaccine against Covid-19, a “clearly insufficient” rate according to the government, which called on Tuesday, June 21, the oldest to receive the injection “as soon as possible”, as a “moderate epidemic recovery” begins. “It’s not going fast enough, there aren’t enough people coming to get vaccinated,” worried the Ministry of Health during a press briefing.

To date, less than 2.2 million second boosters have been injected, out of more than 8.7 million eligible people – mainly those over 60, as well as the immunocompromised. Still, with nearly 200,000 “fourth doses”, the past week has been the most prolific since the campaign launched in mid-March. But the six-month-since-first-reminder rule also swells the eligible population, which will top nine million by early July.

The concern is particularly strong among residents of nursing homes (48% of eligible vaccinated) and other people over 80 (31%), who must “get vaccinated as soon as possible to get through the summer and the winter.” ‘fall serenely,’ insisted the ministry.

Also pointing to “clearly insufficient vaccination rates”, Pr Alain Fischer, Chairman of the Vaccine Strategy Advisory Board, stressed that the “significant decrease” in protection generated by the first booster “fully justifies” a new dose in the oldest to “protect them from serious forms until the fall”.

Especially since the “moderate epidemic recovery” observed in recent weeks (the number of cases has more than doubled in three weeks) “is accompanied by a small resumption of hospitalizations” and risks leading to “a staggered increase in the time” of critical care admissions and deaths, he noted. All the more reason not to wait for new vaccines – in particular, those from Pfizer, Moderna, Sanofi and Hipra, he said – even though “ideally they should be available at the time of the flu campaign” for a new reminder at the end of the year.